You are here: Dare to Ride » Journal Entries » First Day – Edinburgh to Berwick

Feeling a bit nervous as I made the final tweaks to my packing and loaded the bike. However, the weather was good, much better than forecast. 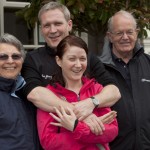 Arrived at the Goeorge Hotel where there was a very good turnout of friends and colleagues. The photo session took much longer than I’d expected so we weren’t ready to set off until just before 11.00 AM. It was all a bit busy and I felt I didn’t get time to say proper goddbyes, especially to Margi. I was escorted by Stewart the exec chef and his cycling buddy Kenny of Rock & Road Cycles, as well as Andy and another of the George chefs. Also with me were my friends Brad, Greg, Monika and Tracey .Just as the rain started.

We pedalled off into the rain, which was quite heavy by now. Andy and the other chef left us just outside Musselburgh; Stewart and Kenny said goodbye at Tranent; the rest of us headed towards Dunbar. We took a wrong turn at Haddington and, while still heading in the right direction, we rode along undulating back roads. Good to be out of the city and the riding was good when the showers stopped. I discovered how much effort is required to haul my fully loaded bike up even relatively gentle inclines.

We arrived in Dunbar at about 4.00 PM and had burgers and steak pies in a local pub. We also dried off a bit. Tracey left to catch the train home and the last four pedalled on. Destination Berwick upon Tweed. 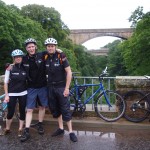 We couldn’t cycle on the A1 so we followed National Cycle Route 76, a pretty hilly route along the edge of the Lammermuir Hills. My uphill progress was painfully slow. Up and down we went. A crazily steep hill out of Pease Bay had us all pushing our bikes. Fortunately Brad helped me push, its really quite heavy! Greg’s plum palinka also helped. More ups and downs with Brad and Greg racing off down a lovely steep hill, right past the turn-off for the NCN route. By sunset, and a particularly spectacular one too, we were just yards from England when Brad got a flat. Quickly fixed though. Then mostly down hill int Berwick

Arrived in Berwick just after 10.00 PM. A long, hard day but we’d covered a good distance. David, Monika’s husband, arrived with his van to take Monika and Greg back to Edinburgh. Brad had decided to stay with me for the next day’s ride, for which I was very grateful. Good to have company on the road. 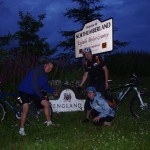 My escort at the border

We got a room in a wee hotel and had to walk miles to a Tesco to get something to eat, which the night porter destroyed in the microwave for us. We could barely keep our eyes open as we ate. Unconciousness quickly followed.

A hard day but a good one. Great to finally be on the way and great to have the company of friends on the first day of a very long journey.

Sorry about the delayed reaction posting. Finding and internet connection is not that easy! Photos to follow.

One Response to First Day – Edinburgh to Berwick