You are here: Dare to Ride » Journal Entries » Day 2 – Berwick to Alnwick

Brad and I rose bleary-eyed and half-heartedly attempted to eat the enourmous fry up placed in front of us. Brad did eat all of his baked beans though. This provided him with important extra propulsion throughout the day. 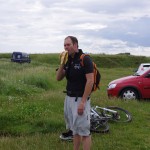 Following NCN Route 1, a lovely big hill took us on top of the cliffs just ouside Berwick. Great, the path should be nice and flat. It was but it was just grass. On a fully loaded bike it was a bit like cycling uphill. The gravel and grass mix continued for quite a number of miles, followed by more torturous long-cuts to avoid the A1.

Decided to stop for lunch when we got to Bamburgh. The cycle route was mostly on the road for this section and the weather was excellent. It didn’t stay on the quiet main road, no, that would make things too easy. We asked directions to Bamburgh and a chap told us to head back to the main road as it was much easier that way. So we turned back – down and up. Then we met to Scottish ladies having a cycling holiday. They’d just come from Bamburgh along the route we’d just been directed away from and it wasn’t far, the main road was much longer. So back we went, down and up. 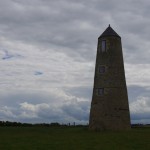 Well deserved burgers and beer for lunch then off again towards Alnwick. Made good progress on the flat coast road, ignoring any NCN signs that headed off the main road. Some big hills into Alnwick but we made it there for about 7.30 PM, just as it started to rain. Much to Brad’s disappointment we discovered that he could get a train home that evening from the station just a few miles away. I found somewhere to sleep and had a drink with Brad before he headed home. Bit of dinner then bed.

It was great having Brad’s company for the second day. Made a big difference to morale having someone to share the ups and downs with.