You are here: Dare to Ride » Journal Entries » Day 5 – Darlington to York

A good day’s cycling on fairly flat roads. Made good time to York with the prospect of a bed in a very nice hotel. For nowt.

Up early and got blog stuff done and photos uploaded. Got chatting to a young ginger chap (not Graeme) who’d been attempting a hundred mile walk with his dog. He had to give up as his feet was done in. He gave me some sunscreen for the desert. 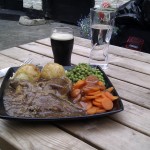 Left about 11.30 AM on the A167. The road was fairly peaceful and reasonably flat. Made good time. Stopped for lunch in Thirsk, the halfway point and the home of James Herriot. A pretty little town that looks like it could double as a set for a TV adaptation of a Jane Austen novel. At the Black Bull I chose the lighter option of liver and onions. I couldn’t have been more wrong. The pub lunches are getting larger the further south I get.

Took the A19 to York. It was either that or long detour across the edge of the North York Moors. Of course we all know that travellers should stay off the moors. I stayed off. The A19 was a busy road with lots of fast traffic. Not the most sedate section of my journey so far but it got me to York pretty damn quickly. Being pretty flat also helped. Arrived just after 5.00 PM and had a seat at York Minster for a bit. 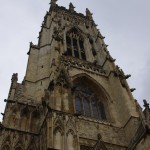 Checked in to the Royal York Hotel. A complimentary night’s stay with dinner and breakfast was organised by David, the GM at The George. Dinner was tasty and I treated myself to a couple of beers in the bar full of happy racegoers, York Races are on this weekend. Caught up with all the blog posts before bed.

3 Responses to Day 5 – Darlington to York