You are here: Dare to Ride » Journal Entries » Day 3 – Alnwick to Newcastle

After breakfast I went shopping and bought a smaller scale map. This one should cover me for most of the next couple of days. More importantly it will enable me to find a more direct route to Newcastle and avoid crazy National Cycle Network detours.

The rain was hammering down so I decided to hang around a bit to see if it would ease off. Spent the time oiling the chain and adjusting pannier fittings. Lost an anti-sway catch near Bamburgh yesterday. I moved the hooks back about an inch so the catch will be further along the rail and less likely to come off. I don’t feel that the hooks grip on the rack or the catches’ grip on their rails are as good as they could be. I know I’m carrying a lot of stuff but these things are supposed to be tough. Exciting stuff. Most of that last paragraph was for the cycle touring fraternity. 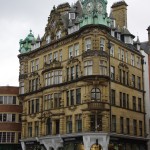 The rain eased so I set off, just after midday. After a few ups and downs the road found the coast and became gently undulating, quite pleasant riding. Arrived in Ashington for lunch just after 2.00 PM. Enourmous plate of mince pie, mushy peas, mashed potato and turnip in a local caff. Hairs on the chest and all that.

The road to Newcastle was much the same as it had been earlier in the day. As I approched the city it became clear that finding a direct route in to the centre, on a bicycle, was not that straightforward for the uninitiated. Got there eventually and booked in to a hostel. Cheap and cheerful. Tried to get some blog stuff done on their painfully slow WiFi. Gave that up and went to bed.