You are here: Dare to Ride » Journal Entries » Day 7 – Lincoln to Peterborough

Set off at 10.30. I’m gradually getting earlier. Big hill out of the city then the road settled down to a series long gentle climbs followed by equally gentle downhills. Quick pit stop at Sleaford services, still on the A15. 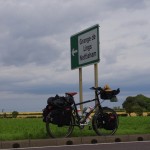 After Sleaford I entered proper fen land. The road was flat as were the endless miles of farmland. Fields, fields and fields, occasionally interrupted by a small copse and a little church spire. Passed through some picturesque villages, such as Folkingham, most of which wouldn’t look out of place in a BBC period drama. Passed another fully loaded cyce tourist going the other way, with his set of shiny white Ortlieb bags and his shiny ginger head. Hope he had the sunscreen on, the weather is glorious. The sunscreen on my arms and legs has picked up thousands of tiny black flies, they don’t last long.

The road was very straight again. For all their technological achievements the Romans couldn’t manage to sort out chariots that steered. Traffic was very light, it was Sunday, but there were loads of motorbikes. Most going very, very fast. Like the flat bits yesterday it was a bit of a slog. Constant pedalling. No lunch stop again, just regular banana breaks. Passed even more RAF bases today, including Cranwell, their main training base. Saw a little single engined plane doing some aerobatics overhead. 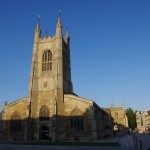 A long and boring section of dual carriageway took me in to the centre of Peterborough towards my spaghetti with meatballs and bed. I’ll need to make a concerted effort to stop skipping between past and present tense in these posts.

6 Responses to Day 7 – Lincoln to Peterborough