You are here: Dare to Ride » Journal Entries » Day 10 – Bishop’s Stortford to Harwich

Didn’t get up until 10.00AM this morning, check-in time for the ferry is not until 10.00PM, plenty of time, why not have a lie in. Bit of a lazy morning chatting to Paul. Started packing the bike and unfortunately damaged the anti-sway catch rail on the rear left bag. I dropped it a few inches and the weight of the loaded bag must have been enough to break the rail. Still attached by two of the three rivets so I moved the catch along so it was gripping the front upright of the rack. Hope it holds, there’s a long way to go. 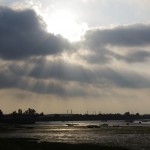 Didn’t get away until just after 2.00PM. Followed the B1256 to Braintree then the busy but civilised A120 towards Colchester. I dropped down on to the A12. Big mistake. There was no indication that bikes weren’t allowed but the A12 is effectively a motorway with no hard-shoulder. So on to the verge I went, pedalling furiously as the trucks hurtled by just feet away. After a couple of miles there was an exit. I took it.

Negotiated the outskirts of Colchester and found that the only bike-friendly route was north-east to the coast then along the coast road to Harwich. Off I went. Bumped in to a German couple who were cycling home from London on an ancient tandem. They’d just got married and the tandem was a wedding present. They were quite slow on the heavy old bike so I quickly pulled away from them. As I cycled down the coastal road I felt I was a bit tight on time. But after a couple of big climbs before Harwich I arrived at the ferry terminal at about 9.00PM. 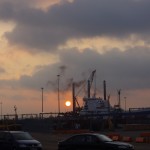 On to the boat, stowed the bike and lugged all of my bags up to the cabin. I had to wait for the third lift as excited groups of happily discourteous elderly tourists kept pushing past me, giving me no time to pick up my stuff and get in the lift. The cabin was small but equipped with a good small bathroom and a telly. I then filled a 4 euro salad bowl with as much food as I could squeeze in to it. Had a glass of wine on deck, shower then bed. Next stop the Hook of Holland.