The ship’s alarm call woke me at 6.00AM. Had a shower, an expensive breakfast then began the laborious task of packing. Took a while as usual. By the time I was at my bike I was almost the last to leave the boat. On consulting my map I decided that instead of heading to Rotterdam the going south, I would head south straight away. Almost immediately I got reasonably lost in the maze of Dutch cycle paths. Although the quality of the paths is great, they don’t always follow the road, making quite confusing. Getting on to the ferry (no. 2 of the day) I got chatting to Peter, a student from the north of Holland. He was on his way to Paris on his precariously loaded bike. He helpfully directed me using his cycle route map but we both almost ended up going in the wrong direction until I pointed out his error. 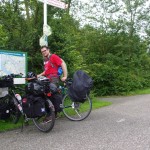 A long stretch of path along a causway between two canals was empty apart from sheep and lots of sheep-shit. Very healthy looking sheep who, unlike their cowardly British counterparts, only casually glanced up from their lunch as I sped by. At Oud Beijerland I stopped and bought a pricey Fietsatlas, a map of all the cycle paths in Holland. Armed with my new navigational tool I started to make some progress. It was slow however, as I kept stopping to check that I was going in the right direction. Which I often wasn’t.

I eventually found a campsite just north-east of Breda. Not as far as I’d wanted to go but my stacatto progress had slowed me down somewhat. The site was small and filled with late middle aged Dutch holiday-makers, staying in either motor-homes or caravans, all set up with canopies and tables and chars. Both my neighbours were permanent residents, one of which, a chap about my age who’d split up from his girlfriend, lent me a chair for the evening. I opend a packet od spaghetti bolognese, that I’d bought from Tiso before I left, only to discover that it was all spag and no bol. No problem, I had two. Getting dark so washed dishes, had a shower then went to bed. 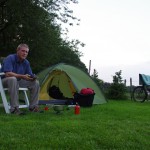 Up at 8.00 AM, it had been a chilly night so the tent fly was damp inside from condensation. I thought I’d hang around to let it dry out in the sun. No sun of course, even a few drops of rain. By midday I reckoned the tent was dry enough so I set off. The routwe to Tilburg was straightforward for a change. A long, winding country road through lots of tidy and smart villages. Bought supplies at Aldi and headed to Moergestel to eat my sandwiches. A dead straight, tree-lined road took me to Eindhoven.

Trying to leave Eindhoven was when my navigational troubles started again. Trying to follow my map took me in several wrong directions several times, with lots of back-tracking involved. Suddenly it hit me. I’d worked out how to use my cycle route atlas. The seemingly random numbers dotted about the map were junction numbers. You simply travel from one juntion to the next in the direction you want to head. Simpe but effective. I was told a few days later that this was developed from a system used in Belgian mines. So I whizzed along between junctions and found my campsite exactly where it was supposed to be. Had beef stew with dumplings for dinner, the last of my supplies from Tiso, it was surprisingly good. Bats and mosquitoes buzzed around as I had a coffee and went to sleep. 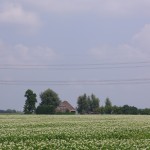 Somehow I still didn’t manage to set of until 11.00AM. Getting to bed earlier is probably the trick there. As I’d worked out the cycle path system I made good progress to Weert, where I bought a small camp stool, then on to Roermond, the last Dutch town before the border. I though I’d try and get a decent map of Germany here. However, the only bookshop I could find had every map except the one I needed. The centre was very busy, full of tourists and towns-folk out on a Saturday afternoon. After about an hour and a half in Roermond I set off again.

I crossed the border on a cycle path right beside the motorway, not particularly exciting. Just like the clouds that greet you at the Scottish border, the hills started almost as soon as I’d entered Germany. Fortunately nothing very taxing. The cycle path followed the main road to Monchengladbach and twisted and turned through a series of nondescript towns and villages. There were lots of industrial areas and possibly a nuclear power station too, at leas that’s what I thought it looked like. 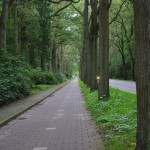 Cycle path in to Eindhoven

I entered Monchengladbach and took forever to actually get to the city centre. It took even longer to get to what we think of as a city centre, shops, restaurants and stuff. Not the most attractive city I’ve passed through. I gave up any idea of trying to find a campsite so decided to find a cheap hotel. I tried a couple of scruffy looking candidates but they were both looking for €50 to €60. I reckoned if I was going to have to pay that much I might as well find a proper hotel. I retired to McDonalds hoping they would have free WiFi like the Netherlands. No such luck. I paid €5 for an hour on a T-Mobile hotspot and found a room for €43 in a wee hotel just at the bottom of the street I was on. I checked in to the Fair Hotel, stored my bike in the room and went out to find some beer and snacks. Drank beer, ate crisps and wrote my journal. Legs really feeling it today, the rest of my body too. Fell asleep quickly.