As I was loading the bike Margi’s parents had got together some supplies for me. Several kilos of apples, plums, peppers and tomatoes as well as a box full of packets of prunes, sweets and bars of chocolate. Very kind but I couldn’t possibly carry all that extra weight. I made my selections while explaining why I couldn’t take it all. I said my goodbyes after a very enjoyable couple of days and left full to the gunnels with fine home cooking.

A very hot day but a gentle tail-wind meant that I set a good pace as I headed along the flat road towards Esztergom. I passed by the enourmous, unfinished gangster’s mansion that Margi had pointed out during our visit in May. I was going to stop and take some photos but there seemed to be work going on and you know how these eastern european gangsters can be. I stopped by the Danube at Esztergom, Hungary’s oldest city, to eat the langos that Margi’s mum had made for my lunch. The route was mostly along the road, which I stayed on instead of following the scenic but longer cycle path. A quickly rectified wrong turn at Szentendre soon saw me at the edge of Budapest. The path by the river was busy. It was Saturday afternoon and there was some sort of big celebration happening that evening.

I got a text from Greg with his father’s address. He lived way down in the south east of the city. Still 17km to go! It took quite some time to find my way across Budapest, a pretty enourmous city. I arrived at Laszlo’s house at about 7.30, just as it was getting dark. I was made very welcome and the beer and Unicum started flowing freely. Laszlo took me round the corner to another house he has, one side of the building being occupied by his elderly mother. After a shower it was back round the corner for dinner accompanied by lots of red wine and more Unicum. We could hear the fireworks from the river and watched them for a bit on the TV. I’d entertained thoughts of going in to town to meet Gary but it was late, I was getting a bit (a friend of a friend from Glasgow) drunk and I was pretty tired. I called it a night and went back round the corner to bed. 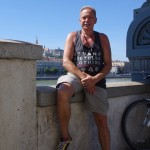 Had a good long lie in and had just finished breakfast at around midday when Laszlo came round and told me we were cycling in to the city to do some sightseeing. He’d be back in an hour. We rode quickly in to the centre, me trying to keep up with Laszlo’s twists and turns on a route he must have ridden thoiusands of times. We stopped briefly at Heroes Square and the park beside it then across the Chain Bridge to take in the view of the city. Then it was up the hill to Buda old town and its fairy tale style castle, alongside which was an old church with an amazingly colourfully tiled roof. Back across the river for a beer where I met Gary and we arranged to meet later. Back to Laszlo’s where we had a swim, a bite to eat and more Unicum. Met Gary in town at about 8.00PM and we proceeded to drink a bit too much beer. Back home to bed.

The next morning I was up early if not brightly. Laszlo had said we were going to the market to buy his favourite spicced sausage. I think he’d forgotten about it as he answered his gate in a towel, obviously just out of the shower. We went to the market anyway but the shop that sold the sausage wasn’t open ’til Tuesday. I went back to bed.

I’d decided that I was going to spend the rest of my stay in Budapest with Gary. Laszlo’s hospitality had been amazing but I was looking forward to a good blether without the use of Google Translate. I set off in to the city to meet the Magyar Radio journalist as I’d arranged. The interview was over pretty quickly, then it was round to Gary’s for a shower and a beer. His girlfriend Linh arrived home and we had some dinner then went out for ice cream and cake. Mine was washed down with a few glasses of fragrant Hungarian white wine. 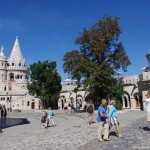 The next day Gary and I went looking for maps and a new MP3 player for me. I didn’t buy anything, thought I’d pick it all up the next day. Then it was a long relaxing soak at Szechenyi Baths. Next thing we knew it was almost 6.00PM. Back in to town for a quick beer then we met Linh at a Spanish restaurant for dinner. It was surprisingly good.

On Wednesday I went to one of the city’s enourmous shopping malls and found a new MP3 player. Then I picked up my maps and went back to Gary’s. I made dinner for him and Linh then we all had a game of Scrabble over a few drinks.

My departure was delayed by doing stuff on the computer that I should have done the day before as well as general faffing around and chatting to Gary. I set off about 11.30 and when I got to the southern edge of the city I found that the main road had a ‘no bicycles’ sign. This meant a pretty big detour around some smaller roads to the south and west. When I found my way back to the main road it still indicated that no bicycles were allowed. Bugger it, I don’t really have any other choice. I was expecting to get told off by the police but the didn’t seem to care at all. 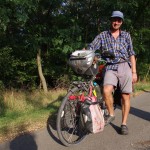 The road wasn’t too busy and the drivers were pretty considerate to cyclists. Where there were sections of cycle path beside the road I took them. It was on one of these that I met Ben, a real long-distance cyclist. He and his wife, who is from Glasgow, were cycling home from New Zealand. They’d been on the road for two years. She was having back problems so had got the train to Budapest a few days before. We chatted for a bit then went our separate ways.

It was well after 4.00PM by this point and I was concious that the sun was heading down and I still had a good distance to go. I arrived in Kecskemet at 6.30PM and found the road to Szentkiraly, a small town not too far away with a campsite. As I rode along the country road the sun started to set. It was dark before I saw the sign for the camp, 3km along a side road. This side road very quickly turned into a sandy path, impossible to ride on. After confirming with a local that this was indeed the way to the camp I made my decision. I was not going to be able to gat along the path, especially not in the dark, so I decided to head back to Kecskemet. It turned out that it was almost 20km back to the town, along a small country road in the dark. Fortunately the drivers all seemed to be doing a sensible speed and gave me plenty of space.

Back in Kecskemet I set about finding somewhere to stay. It was about 10.00PM by this point. I booked a cheap room online and headed to the edge of town to find it. When I arrived it was all locked up, no lights on and noone was answering the phone. Bugger. Booked another place in the town centre and checked in successfully. Didn’t have the energy to go out for food so I dined on peanuts, bananas and prunes and collapsed in to bed exhausted, having done many more miles than I’d planned.

I set my alarm for 7.30AM but didn’t actually get up until 9.00AM and took full advantage of the buffet breakfast. Didn’t get going until 11.30AM but as Szeged was less than 90km away I reckoned there would be no problems. The wind had changed direction overnight and was now coming from the south east, exactly the way I was heading. It was bloody strong too. On the main road I was once again ignored by any police who passed.

Battling through the wind was very tough, and it kept my speed down to a painfully slow 15-17km/h. It was head down and pedal, not paying attention to the scenery around me. Not that it was particularly interesting anyway. I arrived in Szeged at around 6.30PM and found the campsite about 10km from town. Had my tent pitched before it was dark then went over to the camp cafe only to find it had closed. I wandered in to a nearby village but there were only houses and noisy dog. Peanuts, prunes and bananas for dinner again. I don’t know why I don’t have a stock of food in my bag. Time for bed.

Slept late again. Not a good cycle I’ve got into. Even if I’m exhausted I need to get up early so I can get an early night! On the road at 10>30AM and headed into Szeged looking for the main road out of town. On the way I stopped at a supermarket to make sure I had a stock of food and also had some cheesy bread and fruit for breakfast. I started to follow main road number 5. I think it might be easier to call it the A5. According to the map the road, beside the M5 motorway, went straight across the border into Serbia. Ideal. I set off along the main road into the still strong headwind.

When I got to the juntion with the motorway a sign indicated that the A5 was a dead end further ahead. I thought I’d go along and see if bikes could get through. It was indeed a dead end. On old fence and a big old steel gate, with a few buildings on the other side, marked what I assumed was the old border post before the motorway was built. The shiny new border post was clearly visible a couple of km along the motorway. I popped into the town of Roszke 5km to the east. All the roads stopped at the border. Back to the motorway and I found a small road on the other side heading south. Near the border it started heading west. This could be a problem. There were quite a few police cars on and around the motorway. I didn’t want to risk getting kicked off so close to the border. Does nobody take their bike to Serbia other than on the Danube cycle path?

I found somewhere to rest a couple of km back up the road to Szeged. Consulting the various maps I had at my disposal it appeared that the nearest border crossings were about 30km to both the east and the west. However, it was now 3.00PM. So I decided to check in to the campsite that I was conveniently sitting just outside.

Had a shower, got some beer and cooked my dinner then sat down to write almost a week’s worth of journal. I’ve been being a bit lax in that respect. Seems just like having to do homework at the end of a long day. The camp WiFi just reached the tent so I had a video chat with Margi as a couple of hundred Czech school kids had a party on the other side of the compound. Bed time