Up and on the road in good time. I stopped at the service station just before the motorway, just to double check that there were no othere options. There weren’t. On to the motorway I went, slowly making my way along the hard shoulder towards the border controls a couple of km along. I arrived at the end of a large queue of vehicles without incident. A slightly quizzical look from the lady on the Hungarian side was followed by more queueing. The Serbian border chap hardly looked at me as he stamped my passport. I was in. Should’ve taken the plunge yesterday.

Along the motorway a bit a cheery policeman informed me there was an exit just 2km along so I got off the big scary road and was on my way by about midday. I’d decided on a route that took me along some small roads but was a good chunk shorter than on the main road. The headwind was still very stron so I slogged southeastwards in to it at a fairly insignificant speed. I stopped for a very cheap beer and coffee at Novi Knezevac then headed on. At Ada, according to the map, the road crossed the Tisa river. When I got there there was an old ferry up on the bank and no sign of a bridge. Lots of little sandy roads going in all directions so I went back along to the main road with the plan of heading east until I found a road that would take me south again. No such road presented itself. It was getting late so I decided I would stop in Kikinda for the night, about 20km away to the east.

Arrived at about 6.30PM and set about trying to find some free WiFi so I could find somewhere to stay. I saw a chap wearing a Scotland football top and started chatting. Tibor said he could show me somewhere to stay for the night and also told me the the missing bridge had been replaced by a new one a few kilometres away. However it was difficult to find if you didn’t know where to look. He took me round the corner to a guesthouse run by a cheery chap called Carlo. Carlo was half Croatian, half Hungarian and as he cleaned the recently vacated room we chatted in a mixture of languages.

After a shower I headed into the centre to look for some dinner. A couple of young bartenders informed me that all the restaurants were shut on a Sunday night but there was a decent sandwich kiosk round the corner. One huge sandwich later I went back to the bar for a beer and a coffee. On my way home I popped into a shop for some supplies and was helped with the language confusion by the local court translator. They’re a friendly bunch these Serbs. Fell asleep quickly when I got home. 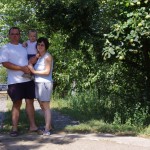 I was ready to go by 9.30AM, which is not bad by my standards. Carlo delayed my departure by insisting I join him for a couple of glasses of his homemade pear cognag. Just the thing to start the day. Apparently. I was on my way by 10.30AM, battling in to the persistent and strong headwind. I’d been on the road for about half an hour when I saw a man and his young son wwalking towards me on the same side of the road. He beckoned me over. “Come, rest” he said, pointing at his house on the other side of the road. “I’ve only just started” I replied. “Rest” he insisted. Aleksandar gave me a coffee and started chatting about cycling. He liked to cycle, just for recreation you understand, maybe doing 50 or 60 km at the weekend. He showed me the still where he made various types of spirit from the plums, pears and apples growing in his garden. After about half an hour I said I’d better be getting on my way. As we said our goodbyes Gabriella, his wife, brought me a large bag of apples and plums and we took the obligatory photos. Off I went, into the wind.

Yesterday the wind hadn’t seemed so bad. I was encouraged by being in a new country. Today it was just hard work. The fact that I’d had to detour to the east the day before didn’t help my mood. My progress was again pitifully slow, averaging about 15km/h. I stopped for a huge sandwich at Milosevo then pressed on. I’d resigned myself to the fact that I wasn’t realistically going to make it much further than Zrenjanin before it got dark so I decided to stop there for the night.

There didn’t appear to be anywhere else to stay in Zrenjanin other than a couple of hotels so I checked in to the cheaper of the two just on tthe eastern edge of town. A large and acceptable dinner of stuffed chicken at a restaurant round the corner filled my belly. I chatted to the waiter. He was from Sarajevo where he’d trained to be a lawyer but came north about 20 years ago and had been working as a waiter ever since. He was pleased to discover I was from Scotland. Didn’t like the English he said! Exhausted and feeling frustrated about my slow progress I fell asleep.

Slept late again and wasn’t on the road untill 11.00Am. There was still a headwind but it wasn’t as strong as the last few days. I was positively speeding along at 20km/h. A bit less hard work gave me the opportunity to observe the scenery. It was just as dull as the last few days. The north east of Serbia is a big, very flat plain with few trees. It is almost exclusively planted with corn and sunflowers. No photos I’m afraid. Wasn’t in the mood. 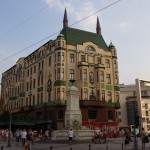 The drivers on the main roads had been pretty safe, apart from one British registered car that sped by me very close. This changed as I approached Belgrade and the traffic got much busier. I struggled along the appalling path over the Danube bridge and stopped on the other side to get my bearings. On setting off I discovered I’d got a puncture in my rear tyre. There had been a lot of glass along the path and on the side of the road. Removing a wheel from a loaded bike is a pain in the arse. You need to unload completely. Inner tube changed, I headed through the city to a campsite at Zemun, apparently 7km from the centre of Belgrade. The centre of Zemun was indeed about 7km from the city but the campsite was at least anothe 7km on from that. In the middle of nowhere. It was almost dark by the time I arrived.

As I was pitching my tent I got chatting to a newlywed couple from Poland. They were driving and camping around the Balkans for their honeymoon. Adrian kindly let me come with him in the car to the shops to pick up some supplies. Dinner cooked and beers drunk I had a chat with the Polish couple for a while before going to bed at around 11.30PM. 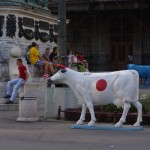 just before 3.00AM I was woken up by a van pulling up not far from the tent. Out got a couple of very drunk Portuguese guys who proceeded to drink and shout and laugh and scream until about midday. No more sleep for Jonny. Just as things had started to go well. I decided I’d find somewhere to stay in Belgrade and try and get some sleep. I was looking for a private room in a hostel but they were no cheaper than the hotel deals I found on Laterooms. I booked a place and headed in to the city. I checked in at about 1.00PM and went to sleep. Air conditioning too. Luxury.Popped into the centre for some dinner and then back to the hotel where I Skyped with Margi and generally vegged about. I was still feeling frustrated about my lack of progress so I just moped about the hotel room for the rest of the night. I should have done the website and got an early night but I didn’t. Wasn’t really in the mood.

Woke up very late the next morning. I’d forgotten to set my alarm. Or maybe I’d swithched off instead of snoozing it. Regardless, I was still feeling pretty lethargic so I checked in for another night. Had breakfast then went back to bed. Spent the afternoon vegging about and popped round the corner to a nice restaurant for a pizza. Back in my room I didn’t do the website again. Iam now doing it after checking out. Its 12.30 on Friday so I probably won’t get too far today. However, I’m feeling rested and more positive about things today. According to the weather report the temperature is not so high and the wind has changed to a favourable direction. We shall see.